Food Packers: Lead Your Customers Outside

Qbag Alu Foil Cooking Bags are a revolutionary packaging format, allowing food manufacturers to extend their reach into the home barbecue market. Consisting of a pre-made aluminium foil pouch with transparent, self-venting, easy peel polyester window on top, Qbag works perfectly either in the oven or directly on a barbecue/grill when it's too hot to be in the kitchen in summer..

First to commercialise Qbag was British supermarket Marks & Spencer, creating the “Pockets” range (pictured left). They launched a refrigerated potato/herb/garlic/onion mix in June 2005, designed to cook either on the barbecue or in the oven. As a new idea, M&S tested the range in 100 stores, rapidly rolling it out to a further 100 as the packs flew off the shelves. Packaging the 340g (12 oz) pack for Marks & Spencer was Bakkavor's (UK) Exotic Farm Produce site, filling the bags by hand. The dead-fold characteristics of the foil keep the bag closed once the bag top is folded. The bag is then placed in a folding carton that helps merchandise the innovative product on-shelf, and provide supermarkets with the tamper-evident seal on the pack.


Because the potatoes continue to respire during distribution the polyester was micro-perforated to allow some oxygen ingress. Refrigerated shelf-life for the item—which retailed for about £2.75 ($4.90 US)—was six days. 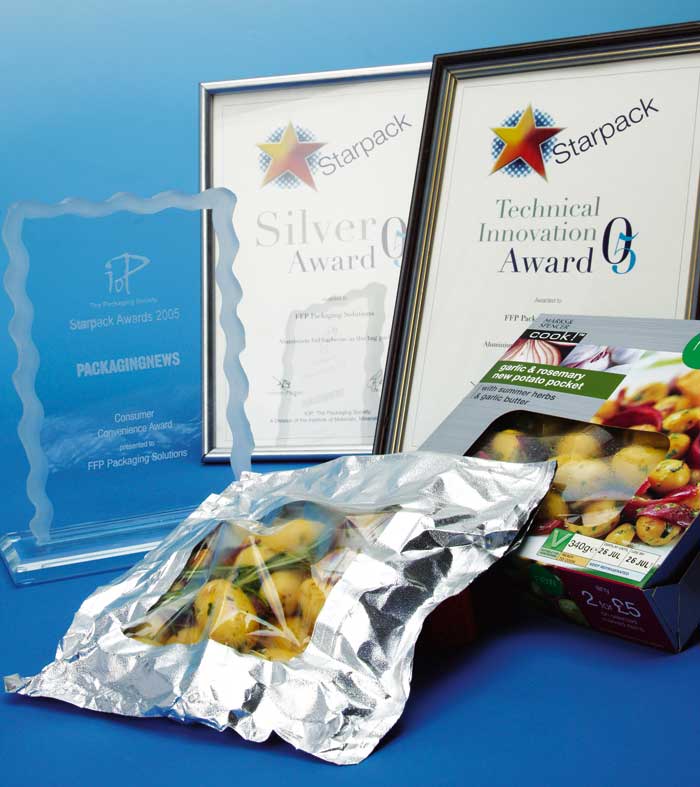 The M&S project was recognised in the 2005 Starpack competition, picking up three awards. Apart from a Silver Starpack, the pack won the only Technical Innovation award presented, and also won one of the awards for Consumer Convenience sponsored by Packaging News Magazine. The pack also went on to win a prestigious DuPont Technical Innovation award presented in the USA.


Capitalising on all-year-round food convenience and outdoor barbecue trends continue to hot topics each year for food production companies and their customers. Cook-in-the-bag packaging such as Qbag offers new options for food manufacturers and consumer food service providers such as supermarkets and food box delivery companies.


During cooking, the food is visible to the chef and expands to provide a pressure-cooking “chamber”, whilst automatically self-venting for pressure and steam to escape safely. The window may be peeled back during cooking to stir, or peeled off completely for food to brown and crisp up, creating a serving vessel to end.


At home, the benefits continue: Qbags can be used to segregate meat, fish and vegetarian dishes without any transfer of flavours or lingering odours indoors. Although Qbag will protect food in the bag from burning and charring on the barbecue, smoke from the charcoal can still infuse with the food inside once the window film has been fully removed (allowing the barbecue/grill hood to be closed) - enhancing flavour but without the mess.


Qbag allows foods with small pieces, such as prawns, or sauced product to be steamed en papillote directly on the barbecue, increasing market potential and extending the selling season for food manufacturers and grocery supermarkets. For fresh produce packers the oxygen permeability of the polyester window can also be modified to extend shelf-life.


The Qbag also works perfectly as an oven-cook pack, so rainy days are no problem, and sales can continue throughout the year.

We work with pioneering food production companies across the world to bring this exciting and compelling way of cooking to market, Contact Sonia today for more information.