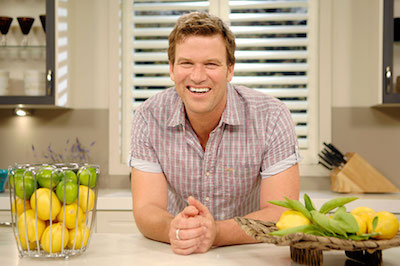 Well-known for his Aussie food show Surfing The Menu with Curtis Stone, Ben O’Donoghue has cooked for everyone from Tony Blair to Silvio Berlusconi. Here, Ben O'Donoghue recommends Qbag for barbecue cooking.

For an unsurpassable banquet, he says you need more than bravado. "Skill is a necessity. Make sure you build up the fire so one part is hot and another part has less coal; then you can move your meat across to the cooler part after it’s cooked. And the golden rule is: never leave your station."

You will need some fresh accompaniments. "Find some very ripe tomatoes," he instructs. "Mix them chopped with basil and grilled peppers. Put some bruschetta on the barbie and then put the ingredients on top.

A salad for gorging on is the classic Caprese [sliced mozzarella, tomatoes, chopped basil leaves and seasoning]. You must time your marinating carefully", O’Donoghue says. "Don’t over-marinate or your grub breaks down horribly. Mix yoghurt with garlic, cumin or ginger – and marinate chicken and fish for only half an hour before.

For steak and pork ribs, allow two to three hours." Then there is the equipment. "Get a set of long tongs so you can cook away from the heat. My best tip is to invest in some Qbags. You can marinate and cook everything from ribs to prawns in the bags and they keep the meat moist. You can also cook vegetables separately," he says. "The biggest gastronomic faux pas," says the Aussie chef, "is to prick anything as it lets all the lovely juices out."

We have 16 guests and no members online

Share your Qbag creations with our hashtag #FoilBakes for a chance to be featured on our social media!